The 6 Best Portable Air Compressors for 2023

If you’ve been searching for the best portable air compressors of 2023 you’re probably aware that there are a number of different ones to choose from.

It can be difficult working out which ones stand out in a crowded field. Fortunately, we’ve done the heavy lifting for you and reviewed six compact air compressors that we believe are the best ones on the market today. You’ll find our detailed reviews below.

These are the Best Portable Air Compressors Right Now:

We believe the Husky C303H portable air compressor stands out in comparison to similar products. We rated it at the top of our list because it combines great features such as a 30-gallon air tank capacity and 175 PSI capacity with a great price.

Husky has a healthy number of products in their air compressor lineup at varying price points for both commercial and residential use. The Husky 30-Gallon 175 PSI portable air compressor is powerful enough for industrial use, but at a price under $500 it’s well within reach in terms of price for the average homeowner.

With a 30-gallon capacity, there aren’t many applications that this Husky air compressor can’t handle. It can also reach an impressive maximum air pressure of 175 PSI utilizing its 2 HP motor.

With all that power you might expect this to be a noisy machine, but it’s actually relatively quiet operating at 78 decibels. This machine operates efficiently as well by using a high-efficiency flywheel for maximum airflow.

There are a couple of problems with this compressor. The biggest one is that it weighs a hefty 150 pounds – the only reasons it’s classified as a portable air compressor is because it’s on wheels that allow you to move it around.

It’s also a corded electric model so you do need an electrical outlet nearby.

The Dewalt D55168 portable workshop compressor is a great product. It outperforms many of its competitors by achieving an impressive maximum PSI of 225. There are competitors with larger air tanks, but 15-gallons will usually be more than enough for most applications. 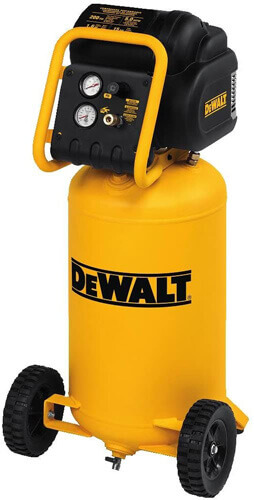 It was hard deciding which was the best portable air compressor that would top our list and the Dewalt D55168 15-gallon portable electric model received serious consideration.

While we didn’t select it as our number one choice we do think this is a great air compressor and a powerful one for the price. Typically this machine retails for less than $400.

One of the most impressive features of this compressor is that it’s capable of achieving a maximum of 225 PSI so it can quickly air back up for secondary use. Its 15-gallon air tank is ideal for almost any task it would be used for in a residential setting.

On the front panel, there are two gauges for monitoring air levels that make it easier to maintain air levels as you work. The tank is made from durable steel that’s designed to last through years of use.

There isn’t a lot to criticise with this compressor, but one thing that does stand out is the weight of the machine at 92 pounds. That makes it awkward to lift and in most cases, you will have to rely on the wheels on the bottom of the tank when you need to relocate it.

One other thing that concerned us was the warranty. For a product that’s going to set you back around $400, we think it should have a longer warranty than 1-year.

The Rigid OF45200SS electric quiet air compressor grabbed our attention with its ability to achieve 200 PSI and the 4.5-gallon tank makes it the perfect size for home use. We would like to see a cordless version of this product, but overall we have no difficulty recommending this for any homeowner in need of an air compressor. 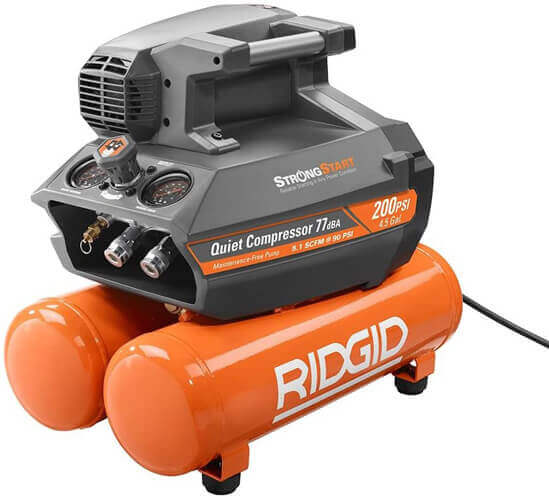 The Rigid OF45200SS compressor is another machine with a lot going for it. While it doesn’t outperform some of the top compressors in this category, it excels by providing a well rounded group of features that matches or exceeds many of its closest competitors. That’s why we consider it to be one of the best small air compressors on the market today.

This Ridgid compressor features a better than average 4.5-gallon air tank. It’s also capable of reaching a maximum pressure of 200 PSI which makes it powerful enough for any home application you may use it for.

On top of that it has some extra features such as Strong Start technology for easy starts and a locking regulator to prevent accidental pressure changes that help it stand out. We were also impressed with how quiet this machine is operating at 77 decibels. They back all of this with a 3-year warranty.

This compressor is relatively lightweight at 61 pounds, but you will still have to take care when lifting it which can be an issue. It’s also important to keep in mind this is a corded machine so you have to have a power source within easy reach to use this machine.

While we did have some concerns with including this Makita compressor in our reviews of portable machines because of its weight of 190 pounds, it has plenty of other features to like. The 10-gallon air tank is one of the largest ones we came across and it has a powerful 5.5 HP motor.

When we considered this with other features like the pressure tank gauges and automatic start/stop feature we were convinced that it is on of the best portable air compressors on the market today. 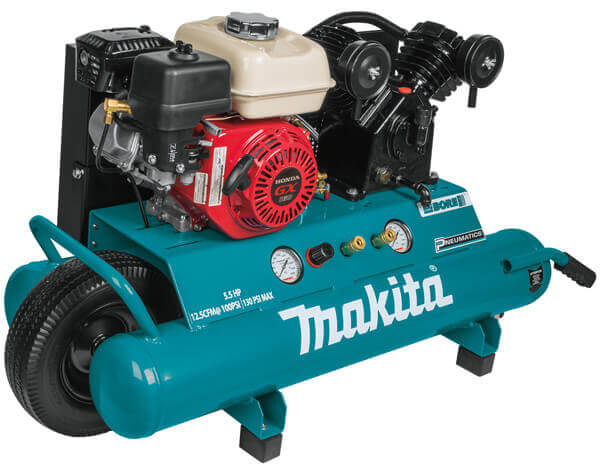 The Makita MAC5501G 10-gallon portable gas-powered air compressor is packed full of features. It didn’t make it to the top of our list because of a couple of shortcomings which we think are important considerations for a portable air compressor for home use.

For some home owners these may not be major obstacles and that will make this particular model rank higher for them. There’s no disputing that it has a lot to offer.

There are a number of things this Makita compressor has going for it. It has a powerful 5.5 HP engine and a competitive 10-gallon air tank capacity. It also has a V Twin style pump that helps it to run cooler than similar machines and that allows it to recover pressure faster.

It’s also equipped with an automatic stop/start feature for safety, tank pressure gauge for monitoring and it has quick connectors for coupling hoses to get started on the job quicker.

There are a couple of major reasons we held back from offering our highest praise for this machine. First it is a gas-powered compressor so you will need to change the oil and tune it up from time to time.

It’s also a heavy machine at 190 pounds so while it may be compact for portability that weight can make it difficult to move without help.

What made us select the California Air Tool 4620AC of our review was its quiet operation at just 70 decibels. Also the 4.5-gallon tank was better than average and the fact that it refills in 60 seconds or less made it an easy choice. 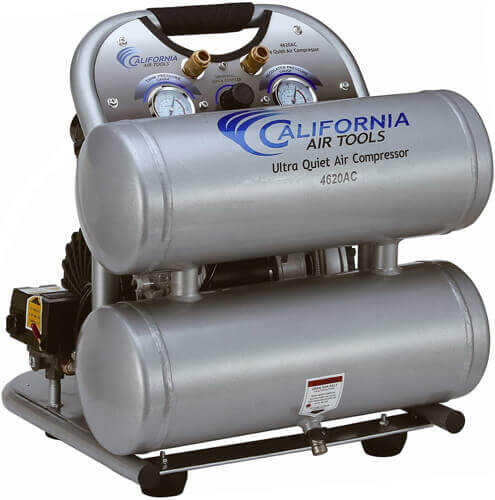 California Air Tools have a range of air compressors on the market in 2023 and the ultra quiet 4620AC is the best small portable air compressor in their line. This is a great tool that’s good enough to be used in an industrial setting, but ideal for home use as well.

One of the top highlights of this compressor is hinted at in its name – its ultra quiet compared to most other products out there. This machine operated at 70 decibels when it’s being used so when you consider that the average conversation is about 60 decibels that’s pretty quiet.

It also has a decent size air tank at 4.5 gallons. Other highlights include a 2 HP motor, a tank that refills in 60 seconds and it has an automatic start/stop feature that ensures it’s always running within the proper pressure range.

This CAT-4620AC compressor isn’t perfect. At 64 pounds it is manageable, but it’s heavy enough that you do have to be careful to use proper lifting techniques.

It’s maximum pressure of 125 PSI is a little underwhelming compared to some of its competitors. One other thing we didn’t like was the warranty – it only covers you for 1 year.

The Campbell Hausfeld DC080500 air compressor blew us away because of its great price and range of features. Finding a great compressor for around $300 isn’t easy, but when you consider that it also has an 8-gallon air tank, operates quietly at 68 decibels and that it has pressure gauges for tracking air pressure you have a product worth a second look. 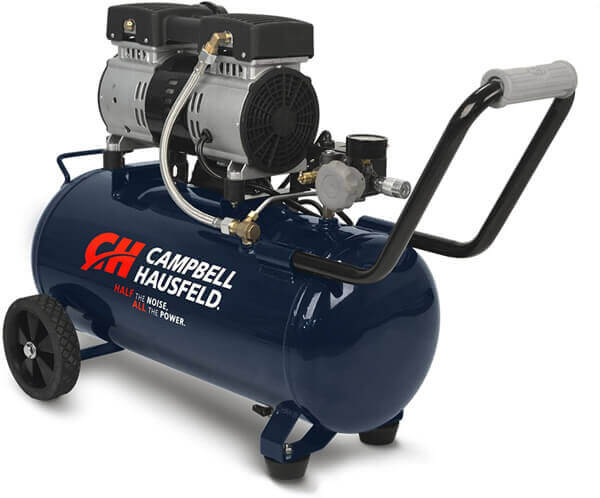 Campbell Hausfeld may not be a household name for many, but they have a strong reputation in the air compressor field. The small yet powerful 8-gallon electric air compressor is one of the most complete models in their product line-up.

It’s also our pick as the best bargain portable air compressor on the market today at just over $300. If you’ve been thinking about purchasing an air compressor, but you were worried about the expense, Campbell Hausfeld has solved that problem.

Price isn’t the only thing this machine has going for it – it’s also extremely quiet for an air compressor. It only reaches about 68 decibels during normal operation which isn’t much louder than the conversation you’ll have with the family at tonight’s dinner table.

The 8-gallon air tank is another great feature of this machine. This compressor also has wheels for easy movement, pressure gauges for tracking air levels and an automatic start/stop feature.

On the negative side this isn’t the lightest compressor on the market at 66 pounds so you may have trouble lifting it. It’s also limited to 125 PSI, which is adequate, but not overwhelming.

We were also concerned with the warranty on this product. You’re only covered for 1-year which leaves you vulnerable over the long term.

The range of portable air compressors available can be a bit overwhelming and that’s why we put together these reviews. We placed the Husky C303H 30-gallon 175 PSI compressor at the top of our list, but there wasn’t a major gap between any of the products on this list. The choice isn’t easy, but we hope these reviews made the job a little bit easier. 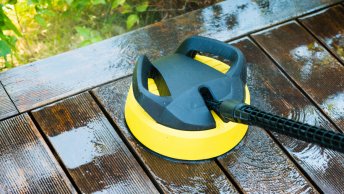 The 5 Best Pressure Washer Surface Cleaners to Buy in 2023 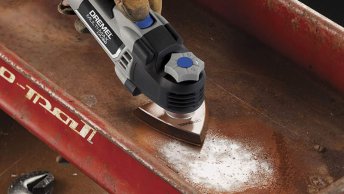 The 6 Best Oscillating Multi-Tools to Buy in 2023 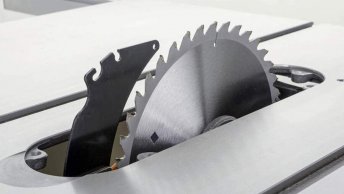 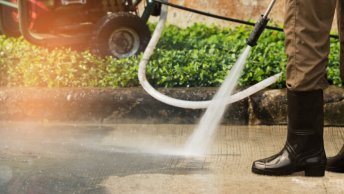 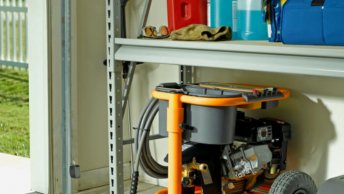 The Best Shelving to Organize Your Garage Space in 2023

20 Most Essential Gardening Tools You Should Have: The Complete List 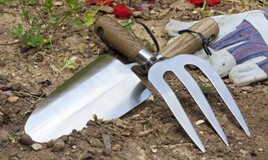 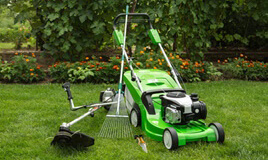 Lawn Care & Maintenance Tips and Techniques for Your Yard 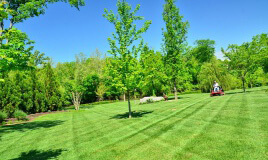